4. Governance of the standardization process

This document, Brain Imaging Data Structure (BIDS): Governance and Decision Making, intends to describe the BIDS mission, its principles, its scope, the leadership structure, governance over the standard development process, and to define the different groups and roles. BIDS is a community-built and maintained standard. The goal of this document is to clearly describe how BIDS is maintained and grown.

The Brain Imaging Data Structure (BIDS) is a standard specifying the description of neuroimaging data in a filesystem hierarchy and of the metadata associated with the imaging data. The current edition of the standard is available in HTML with all the previous editions available since October 2018 (listed in the Changelog). The pre-October 2018 specification editions can be found in this repository as PDFs. The development edition is available in HTML. The specification is based in a GitHub repository and rendered with ReadTheDocs.

We strive for community consensus in decision making. This governing model and decision making procedure was developed through the review of several governance models across the informatics and computing field.

The project is a community-driven effort. BIDS, originally OBIDS, was initiated during an INCF sponsored data sharing working group meeting (January 2015) at Stanford University. It was subsequently spearheaded and maintained by Chris Gorgolewski. The project is currently managed and maintained by Franklin Feingold, Stefan Appelhoff, and the Poldrack Lab at Stanford. BIDS has advanced under the direction and effort of contributors, the community of researchers that appreciate the value of standardizing neuroimaging data to facilitate sharing and analysis. The project is multifaceted, and depends on contributors for: specification development and maintenance, BIDS Extension Proposals (BEPs), software tools, starter kits, examples, and general discussions. The relevant discussions are located in our Google Group, GitHub organization, and public Google Documents (typically associated with an extension proposal).

A key component of the BIDS initiative is the collection of associated software tools and platforms that facilitate the validation and ease the use of BIDS-formatted datasets. BIDS converters (e.g., HeuDiConv) enable the streamlined conversion of raw imaging files (e.g., DICOMs) into a BIDS dataset, the BIDS validator allows users to confirm that a given dataset complies with the current edition of the standard, the PyBIDS Python and bids-matlab libraries allow querying and manipulating BIDS-compliant datasets, BIDS-Apps for running portable pipelines on validated BIDS datasets, and platforms like OpenNeuro store and serve BIDS datasets. Note that the associated software does not fall under the same governance structure as BIDS, although the contributor and user base may largely overlap.

The goal of BIDS is to make neuroimaging data more accessible, shareable, and usable by researchers. To achieve this goal, BIDS seeks to develop a simple and intuitive way to organize and describe neuroimaging and associated data. BIDS has three foundational principles:

To achieve the goals of widespread adoption of the standard while growing to adapt to its community of members, BIDS is led by a series of groups.

The following figure illustrates the structure of the groups described in this document. The specific organization and responsibilities of these groups are laid out in detail, below. 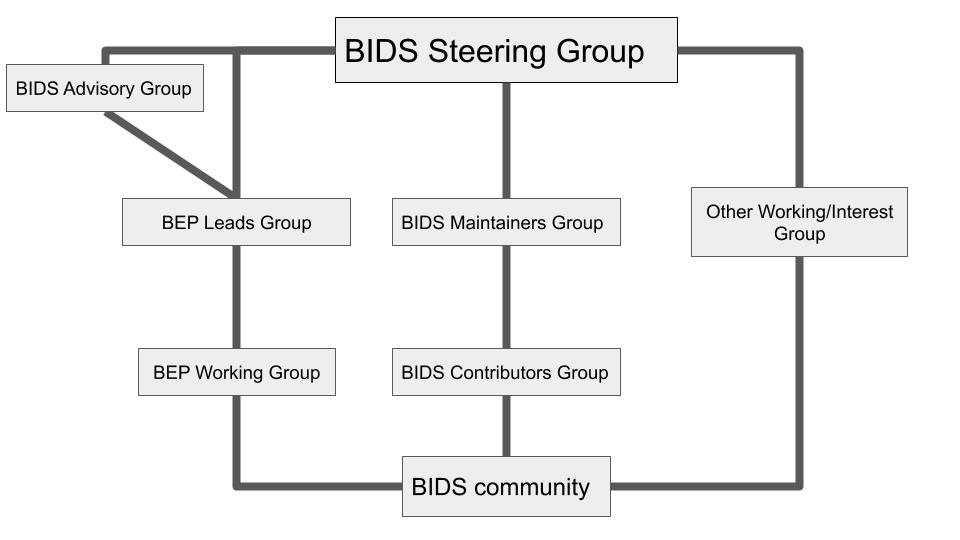 The BIDS Steering Group is the authority of last resort in addressing conflicts among groups and alleged violations of the Code of Conduct.

The Steering Group may delegate tasks as needed to fulfill its responsibilities.

The current members of the Steering group are:

A BEP Working Group is established for every BIDS Extension Proposal (BEP). Each working group will have 1-3 group-appointed leader(s), referred to as BEP Lead(s). Every BEP Working Group is formed with the aim of extending or modifying the BIDS standard into their domain of interest. This can be either an unspecified modality or derivative. The BEP Lead and Working Group will determine how they organize their work, following the BIDS governance standards laid out in section 4 of this document and the BIDS Code of Conduct. The BEP Working Group work is completed when their BEP has become a Merged BEP.

This group is responsible for maintaining the BIDS specification on GitHub. The Lead Maintainer and the Maintainers Group will determine how they organize their work, detailed in the BIDS Maintainers guide and in accordance with the BIDS Code of Conduct. The maintainers guide is subject to Steering Group approval and amendment. BIDS contributors may self-nominate to become maintainers, with approval by a majority vote of current maintainers.

This group submits monthly status summaries to the Steering Group.

The current members of the Maintainers group are:


If you need to contact the maintainers on a specific topic you can use the following emails:

Members of the BIDS Contributors Group are encouraged to support the BIDS specification by supporting the members of the Maintainers Group in their responsibilities.

This group contains previous BEP Working Group Leads. The purpose of this group is to provide advice and guidance to the BIDS Steering Group and the BEP Leads Group.

A working/interest group can be established under the approval of the BIDS Steering Group. This is typically but not limited to being formed for the purpose of advancing the BIDS community, not the standard. Each group will appoint 1-2 chairs. Members of these groups can have cross appointments in other groups (e.g., BEP Working Group). These groups do not necessarily dissolve after some duration or event, unless stated in their proposal.

The working/interest group formation is formalized through an open letter via a “read-only” Google Document addressed to the BIDS Steering Group. The open letter will be posted on: the BIDS-Specification GitHub, Google Group, and Twitter. This proposal will state what their group aims and goals are.

Along with members of the preceding groups, this group comprises broadly any individual who has used or has interest in using BIDS. All members are invited, and encouraged to join the BIDS Contributor Group by supporting the project in one of the many ways listed in the “All Contributors” emoji key. All community members are welcome to join BEP Working Groups and other working and interest groups.

The current BEP Working Groups and their leads can be found in the section on BIDS Extension Proposals in the BIDS specification.

4. Governance of the standardization process

A. Principles for open standards development

The foundation of BIDS decision making is listening to all members of the BIDS Community and striving to achieve consensus on each level of the BIDS standard process.

The criteria for forming a new BEP Working Group:

The criteria of the BIDS Steering Group evaluation for elevating a Draft BEP to a Proposed BEP:

Upon a successful Draft BEP review, the BEP will be converted from a google document to a markdown file and entered as a pull request on the BIDS standard. This will enable further community feedback on the Proposed BEP. Tools may begin integrating the Proposed BEP specification.

The criteria for merging a Proposed BEP into the BIDS Standard:

BIDS Specification - This is the BIDS specification. This covers the current raw data organization for brain MRI, MEG, EEG, and iEEG.

BIDS Extension Proposal (BEP) - A proposal that intends to extend BIDS into an unspecified modality or derivative. A BEP is typically led by 1-3 individuals with several contributors. The list of BEPs can be found elsewhere on this website.

Draft BEP - The in-progress document, typically in a Google Doc, of a BEP. This is dynamic and is grown and maintained at the discretion of a BEP Working Group.

Proposed BEP review - This review is performed by the BIDS Steering Group on the Proposed BEP. The review aims to ensure the community input was incorporated and the final version integrates into the current edition of the BIDS standard specification.

Merged BEP - A Proposed BEP that has been reviewed and approved by the Steering Group and merged into the BIDS standard.

Elections will be managed through a 3rd party platform that allows restricting votes to a specific set of email addresses while maintaining the anonymity of the votes. A list of email addresses from the Contributors Group will be maintained by the Steering Group for the purposes of announcing elections and will not be used for any other purpose and will never be analyzed together with voting data.

Each Contributor will receive an email with information regarding the vote and the link to submit the vote. The information will contain a brief summary of what the vote is about with links to the relevant issues, as well as the deadline for the vote.

For Steering Group members, a ranked choice/instant runoff voting scheme will be used. Propositions will be yes/no questions, with the outcome determined by a simple majority. Voters may abstain on any ballot item.

A vote will be considered valid if at least 20% of the Contributors submit votes.

In order to establish a governance procedure at the same time as a governing body, certain variations in the normal order are required.

Initially, Steering Group members will be elected for staggered terms of 2/3/4 years, to allow continuity and overlap across years. This will ensure institutional knowledge is preserved within the BIDS Steering Group. In the initial BIDS Steering Group, there will be at least one non-MRI modality represented.

The Steering Group member nominations were put forth by the BIDS Community from August 7-28, 2019. The nominees self-organized into slates of five candidates, with an identified Chairperson. Nominees were eligible to participate in multiple slates. The community will vote among these slates in a ranked choice/instant runoff voting scheme.

Because there are no grounds to restrict the vote to the BIDS Contributors Group prior to the ratification of this document, the electorate is to be the BIDS community, construed broadly as anybody with an interest in voting. The votes will be cast with two Google Forms: one to capture the vote and the other to record email addresses. The email addresses will not be analyzed together with the voting data, except to identify a situation in which many more votes are collected than valid email addresses. If the situation arises that the legitimacy of the vote is called into question, then the email addresses will be used to hold a special election under the terms laid out in Appendix B, to wit, “Elections will be managed through a 3rd party platform that allows restricting votes to a specific set of email addresses while maintaining the anonymity of the votes.

To the extent possible under the law, the authors have waived all copyright and related or neighboring rights to the BIDS project governance and decision-making document, as per the CC0 public domain dedication / license.

The bids.neuroimaging.io website contains links to all the BIDS informational and help materials.

We encourage questions and discussion on NeuroStars, under the “bids” tag, via the BIDS mailing list, or in GitHub issues within the appropriate repository.

We prefer questions to be asked via NeuroStars so that others can search them and benefit from the answers, but if you do not feel comfortable asking your question publicly please email either Franklin Feingold at ffein@stanford.edu or Stefan Appelhoff at appelhoff@mpib-berlin.mpg.de. They will repost an anonymised/general version of your question on NeuroStars and answer it there.

There are several resources that can help a new user get started. We have a starter kit GitHub repository that has example BIDS file structures, wikis, and tutorials, and the Stanford Center for Reproducible Neuroscience blog provides tutorials and community survey results.

All BIDS community members are required to follow the BIDS code of conduct. Please contact Franklin Feingold at ffein@stanford.edu if you have any concerns or would like to report a violation.

This document draws heavily from the Modern Paradigm for Standards and from other open-source governance documents including: